This was originally posted on the Cascade Run Club website as Why We Run Wednesday: Michael L. 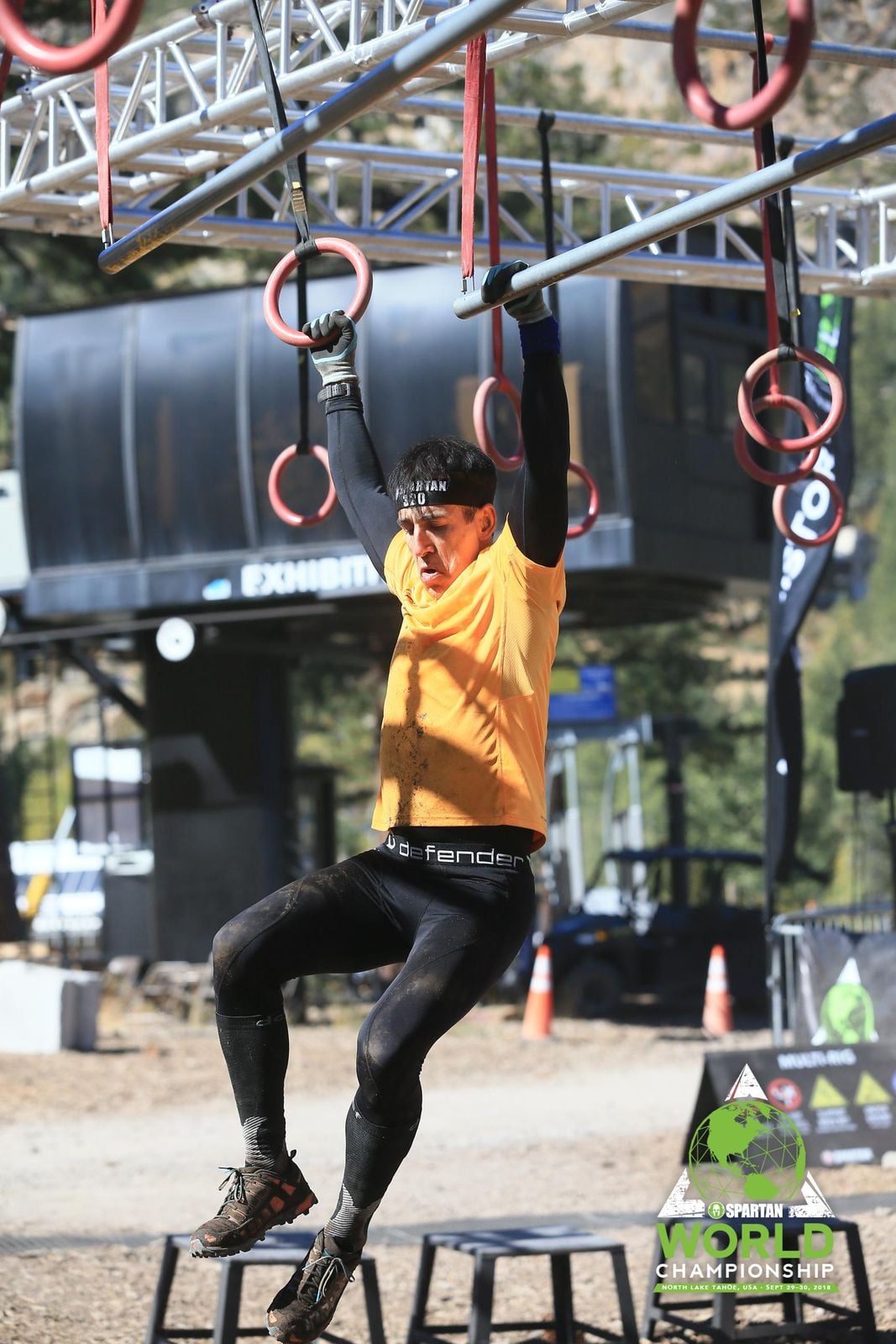 My name is Michael Lee and I joined Cascade Run Club in January 2019. I run the occasional road race, but my passion is obstacle course racing, specifically Spartan Races. I qualified to compete in the 2019 Spartan World Championships for my age group and that is the current focus for my training. I call Spartan racing my “Celebration of Life” Tour because it is somewhat of a miracle that I can even run at all today.

My relationship with running began unexpectedly when I was 10 years old. My dad was signed up for a 10k on a Saturday morning and at the last minute got called in to work. He invited me to run the race in his place. At that time in my life, I played on a competitive soccer team and that was the only running I did.

It was a cold rainy winter day. I wore thick cotton sweatpants and a thick cotton hoodie, thinking it would keep me warm, but by mile three they became so heavy with the rain that my pace slowed to a crawl. I remember ripping them both off and feeling like I could fly. I don’t remember my time, but I finished that 10k. My running hobby was born.

Throughout high school and college, I ran cross country and track, but it was always a secondary endeavor to keep me in shape for my first love, soccer. In my early twenties, I trained with a college buddy and we ran a few half marathons and a couple of marathons. My best half marathon time was 1:19 and my best marathon time was 3:22. Shortly after my last marathon, I got a job that required 80% travel. I tried to train for a third marathon but the rigors of travel, time zones, and long work hours prevailed and my dream of running a third marathon never materialized.

I laid off running for years. I got back into it in 2014 when some friends invited me to run Tough Mudder and I knew I could not run the 11-mile course without training. I enjoyed the TM experience and joined my friends to run TM again in 2015. At that point, it looked like my running hobby was in revival but then came a fateful day in February 2016.

I can almost guarantee you had a better Valentine’s Day than I did in 2016. I was snow skiing at Steven’s Pass when I slipped, fell, and broke my neck. I was admitted to Harborview Hospital in Seattle with a fractured C-5 and a partially paralyzed left arm. Suddenly, not only was my running in jeopardy but the entirety of my life appeared to be on the cusp of a significant transition. 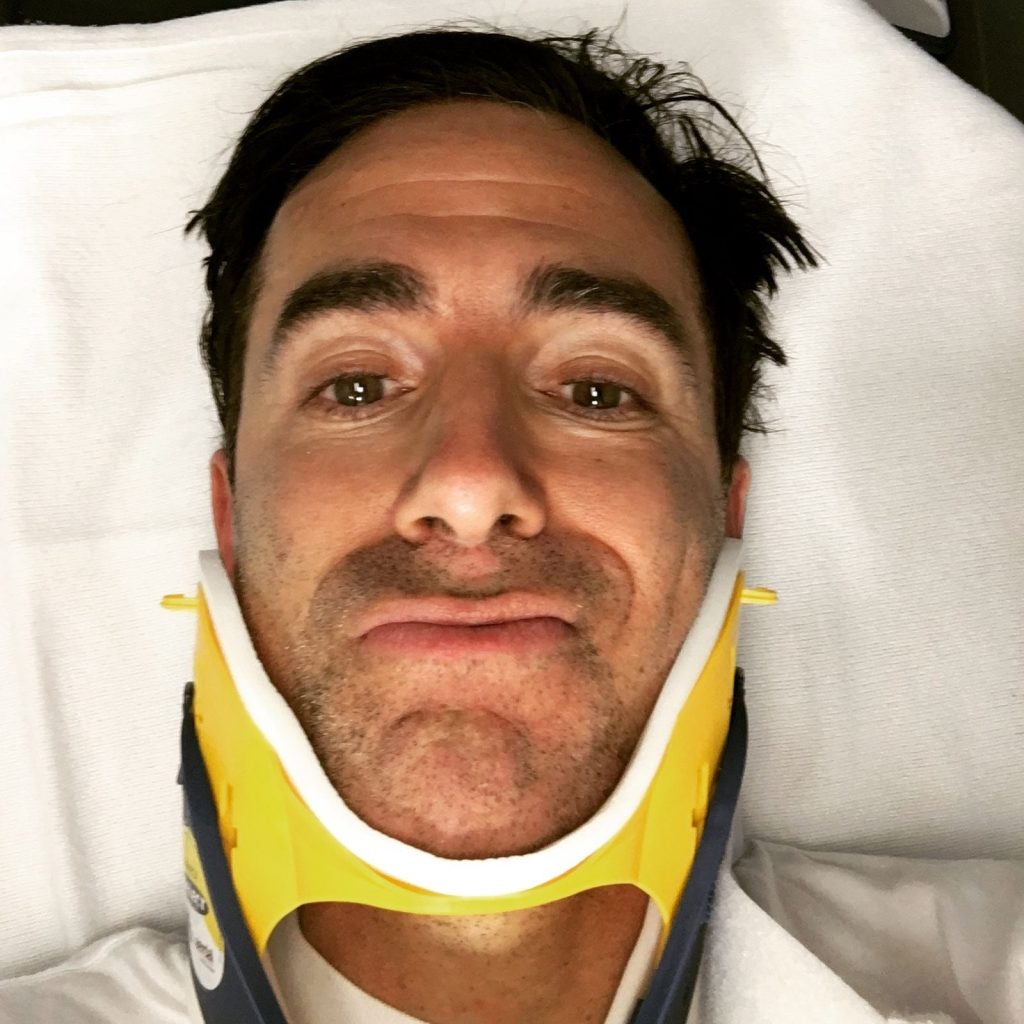 The ski accident was my first broken bone ever and my first hospital stay ever, and it was overwhelming. The neurosurgeon did not help when his last words to me that night were, “Michael, I am sorry we can’t give you anything to eat or drink right now because I will be back in six hours to operate on you.”

The next morning, I was prepared as I could be for my first operation. The neurosurgeon arrived on time, but he decided to postpone surgery. He wanted to give the injury time to “settle”. They planned to take x-rays the following morning and make the final decision then.

During my day in the hospital the nurses got me up four times to walk me around the hospital floor. I thought it was funny, even with a broken neck, I was still getting some steps in and I was so thankful for each and every step. After the x-rays the next morning, the neurosurgeon returned with the good news; I was leaving the hospital with just a neck brace, no surgery.

Rehab lasted six months, five weeks in a brace, the rest in physical therapy. During the weekend before my final neurosurgeon appointment, I was in Whistler attending the Red Bull 400 with some gym friends. When my friend John heard about the upcoming doctor appointment, he invited me to celebrate my pending freedom by traveling with him to Portland the following weekend to run a Spartan Race. I said, “What’s a Spartan Race?” John said, “It’s like Tough Mudder but only 4 miles.”

On the following Saturday, with the neurosurgeon’s approval, I ran my first Spartan Race with my friend, John, and in retrospect, I had no idea what I was getting myself into. It was so much harder than TM. In Spartan Races, if you fail an obstacle you must complete a 30-burpee penalty and I did over 240 burpees that day! I was exhausted and a bit demoralized at the end, but I finished. As I walked around the venue after the race, a peaceful sense of joy filled my heart. I realized that I could have been dead or paralyzed six months ago but was given a second chance at life. And, so, on August 5, 2016, my Celebration of Life Tour was born on a Spartan course.

Since then I have completed 69 Spartan Races in just over three years, including, 29 Sprints (4 miles/20 obstacles), 21 Supers (8 miles/25 obstacles), 18 Beasts (13.1 miles/30 Obstacles), and 1 Ultra Beast (26.2 miles/60 obstacles). In 2018, I began to compete in the competitive age group division and to my surprise and delight, took third place in the Spartan US National Series. Last December, I took second place in my age group at the USA OCR National Championship, held in conjunction with the final Spartan Race of the year in Los Angeles.

Up until that point, I was working with a trainer for grip strength improvement, but I was running on my own. I discovered the Cascade Run Club in late 2018 when I stopped by Super Jock ‘n Jill for a new pair of shoes and asked about running coaches. Yon happened to be there that day and told me about CRC. It was a divine appointment.

I am enjoying my first year in CRC. I quickly realized it is more than just a run club. It is a community and I am happy to be pursuing my running goals alongside new friends. You are all a part of my Celebration of Life Tour now and the next stop will be at the Spartan World Championships on September 29th.

I run Spartan Races because first and foremost, I can. My neurosurgeon said that everything about the injury went the right way for me to make a full recovery without surgery. Second, I run Spartan Races because the training and the competition teach me resilience. I am developing a Spartan mindset in all areas of my life and I like who I am becoming. I am stronger than I thought I was, and capable of more than I thought possible. The same is true for you. I hope my journey inspires you to pursue more of what you want in life, on the running course, and off it. I look forward to new CRC adventures together in the seasons ahead…